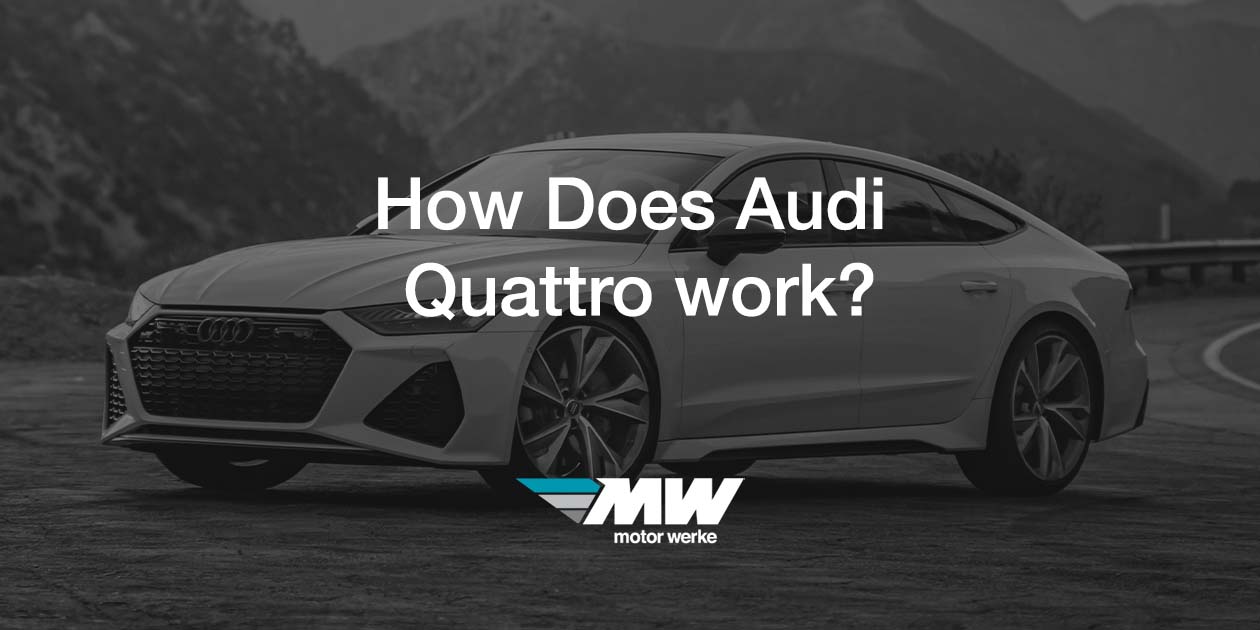 Audi’s have been well known for their all-wheel-drive systems since its introduction in the Quattro Rally Car way back in 1980. Since then, most Audis roll off the assembly line with “Quattro” branded on the back. Everyone knows Audi’s are great on snowy, wet, or dirt roads, but why? How does Quattro make Audi’s so good in variable road conditions? Read on to learn how Audi’s Quattro AWD system works.

Audi first introduced its AWD system in rally racing. They put all-wheel drive and a turbocharged 5-cylinder engine in the Quattro rally car and were immensely successful. After that, they began including AWD in production models sold around the world.

How does Quattro work?

The term “Quattro” doesn’t define a single AWD system. It’s a term used by Audi to describe any AWD system used in their vehicles, and the systems they use can vary.

The rear differential was also lockable, but the front diff remained open to accommodate the difference in wheel speed when turning.

The next version of Quattro replaced the locking center differential with a Torsen diff. Torsen, short for torque sensing, defaults to a 50:50 torque split between the front and rear of the car. Torsen differentials are proactive, meaning they respond to wheel slip instantly, and can send up to 80% of torque to the axles that still have traction.

The entirely mechanical nature of a Torsen differential means it requires no input from electric sensors or the ECU, allowing it to continue functioning if an electrical component, like a wheel speed sensor, goes bad.

The Torsen center differential layout was introduced in 1988, and was used until 2010 with some changes made as technology advanced:

Other types of Quattro

Not all vehicles branded “Quattro” use a center differential. Audi’s models with transversely mounted engines and its high-performance R8 supercar use unique all-wheel-drive systems that are also branded “Quattro”

Not all of Audi’s vehicles have a longitudinal engine layout. On Audi’s smaller models like the A3 and TT, the engine runs from left to right in the engine bay with the transmission sitting to the side of the motor. Referred to as transverse, this layout is frequently used in front-wheel drive vehicles. The Haldex system allows for a front-wheel drive-based vehicle to be converted to all-wheel drive relatively easily.

A prop shaft runs from the transmission to the rear of the vehicle where it enters a Haldex coupling. When the coupling senses the front wheels slipping, hydraulic pressure builds inside it and engages a clutch, allowing power to flow to the rear and front axles simultaneously.

The main downside of a vehicle equipped with a Haldex system is by default, its front-wheel drive. The coupling does not engage unless the front wheels slip, and as a result, the car retains some undesirable handling characteristics of front-wheel-drive cars.

The Audi R8 is a mid-engine all-wheel-drive supercar. By default, the torque split on the R8 has a heavy 15:85 rear bias, which is common on AWD sports cars. A prop shaft runs from the transmission at the rear of the vehicle to the front, where it enters a differential with a viscous coupler.

A viscous coupler is a device containing multiple clutch plates sitting in a viscous fluid. When a rear wheel loses traction, the prop shaft spins faster. The oil in the coupler heats up due to the increased rotation of the prop shaft and becomes more viscous. The more viscous the fluid becomes, the more clutch plates are engaged, leading to more torque being sent to the front wheels.

If your Audi needs service, Motor Werke can help!