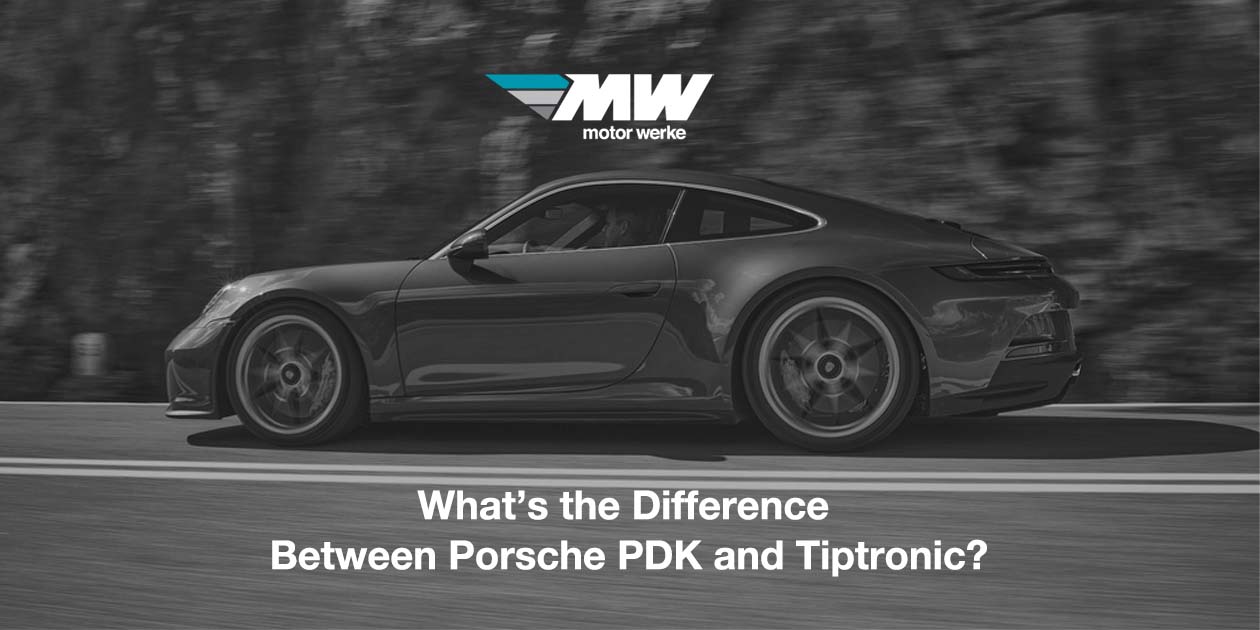 Porsche builds cars that cater to the enthusiast and historically offered manual transmissions in their flagship sports car, the 911. While they still offer three pedals on modern 911’s, Porsche has also developed some impressive automatic transmission technology over the years, which culminated in the PDK dual-clutch gearbox. The PDK was not the company’s only effort at producing a high-performance automatic. Before the prevalence of PDK, Porsches were offered with a traditional automatic known as Tiptronic. Even today, some new Porsches use a Tiptronic transmission in place of the dual-clutch ‘box.

But what’s the difference? We are going to take a deep dive into what separates the PDK transmission from the Tiptronic.

Way back in 1968, Porsche introduced its first automatic gearbox. The company recognized that not everyone wanted to shift their gears, and to cater to that market, Porsche released the Sportomatic transmission.

This gearbox wasn’t a true automatic. Using a vacuum-controlled clutch, the driver was able to shift gears using a gear lever you would find in a manual transmission car. The difference though was the lack of a clutch pedal. This transmission was an early attempt at a semi-automatic transmission and was used in Porsches until 1980.

Next came the Tiptronic automatic, which was sourced from ZF. Porsche modified the ZF gearbox, making it more adaptive and sporty. It also included a manual mode as we see in automatic vehicles today. The Tiptronic transmission was introduced in 1991 in the 964 generation 911, and iterations of it have been used since.

Throughout this time, Porsche’s racing engineers had been developing and perfecting a dual-clutch transmission which would become known as Porsche Doppelkupplungsgetriebe, or PDK. After nearly 30 years of use and development in racing, Porsche finally put the PDK transmission in production cars starting in 2005.

How are PDK and Tiptronic different?

Nowadays, you will find either a PDK transmission or a Tiptronic in a Porsche. Despite both being automatic, the similarities between these ‘boxes end there.

Tiptronic gearboxes start life as a standard torque converter automatic sourced from ZF. This style of transmission uses a series of planetary gear sets, clutch packs, and a torque converter to transfer power from the engine to the ground. Porsche made some changes to the original gearbox provided by ZF to improve performance.

Porsches PDK transmission is a dual-clutch automatic. Dual-clutch transmissions are engineered in a very similar way to a regular manual transmission and provide the most rapid and responsive shifts available in production cars.

Dual-clutch transmissions use two sleeved driveshafts coming out of the engine, each controlled by its clutch. Each driveshaft is responsible for a set of gears. One controls odd gears and the other controls even ones. With two clutches controlling the drive shafts, the transmission can start a gear change before it happens. The next gear will be ready to go when the first clutch is disengaged, allowing instant power when the second clutch engages.

This rapid shifting is controlled by a mechatronic unit that controls the transmission and works to anticipate the next gear change. If you want to learn more about how clutch transmissions work, read our article on the Volkswagen DSG transmission.

With its ultra-fast shifting, Porsche puts its PDK transmission in its high-performance sports cars and sedans. The responsiveness and high-speed shifts can’t be matched, even by a good driver with a manual.

As you can see, Tiptronic and PDK transmissions are very different in function. The PDK is a performance-oriented transmission with racing pedigree, and the Tiptronic is Porsches high-tech twist on the classic automatic gearbox.

Bring your Porsche to Motor Werke

Regardless of whether your Porsche has a PDK, Tiptronic, or conventional manual transmission, the team at Motor Werke has the understanding and training to service and maintain it. Give us a call or schedule an appointment today!