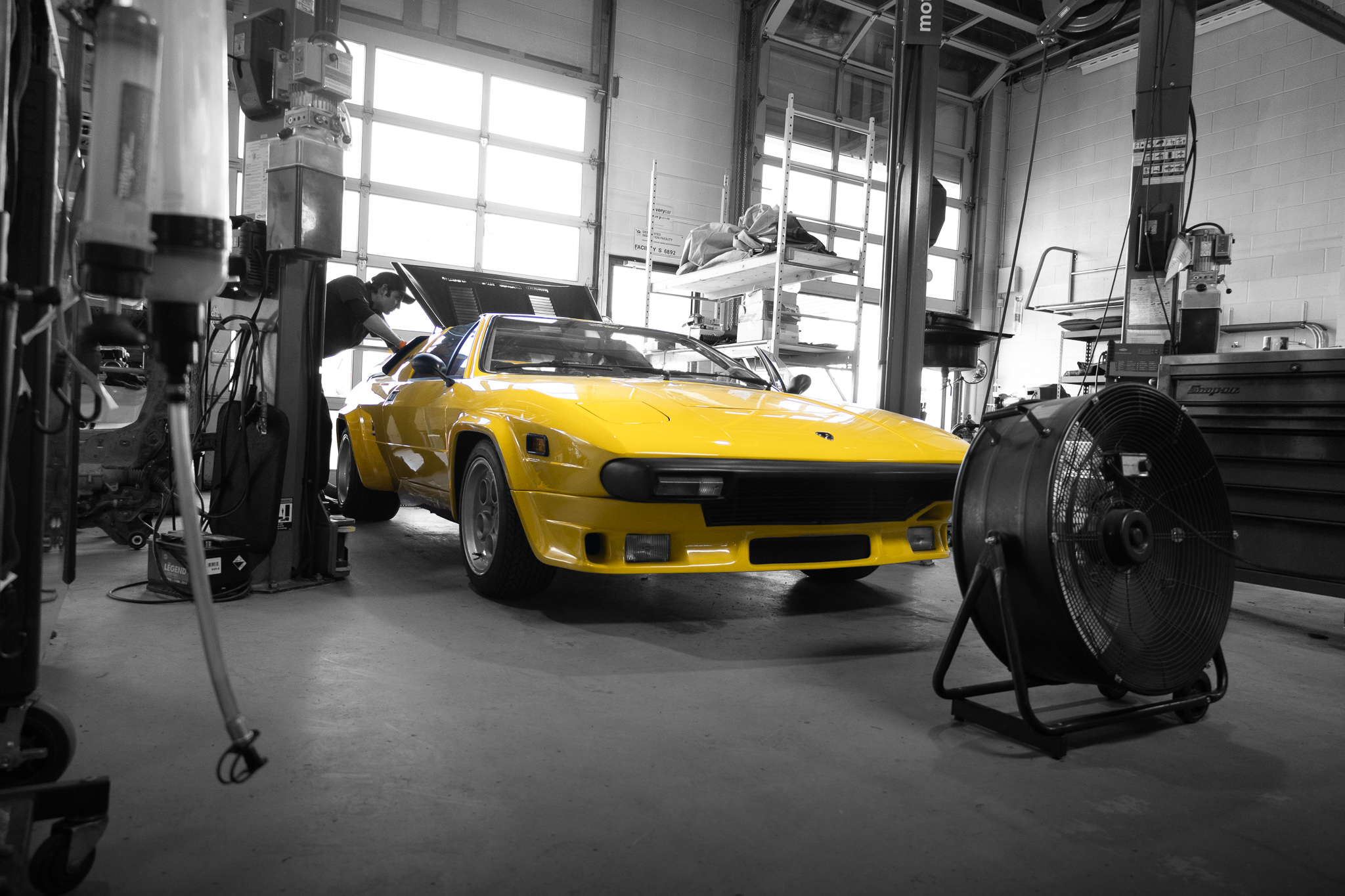 The Lamborghini Silhouette is a low production model based on the bones of the better known Uracco P300.

In the mid 1970s, Lamborghini had Italian designer, Carrozzeria Bertone create a new body for the Uracco chassis. This was done in an attempt to help boost sales while Lamborghini was struggling through the oil crisis of the 70s. Only 53 Silhouettes actually made it through production between 1976 and 1979, with just 32 of those known to still exist today.

Over the last year, we have had the opportunity to have one of these incredibly rare examples in the Werkeshop for a fair amount of highly involved work. As expected with a car of this nature, there have been more than a few hiccups and speed bumps along the way, but our team has overcome the challenges one by one to bring this car to completion.

The first task was to address the oil leaks. We removed the engine and disassembled it to reveal the full extent of what needed to be done. While it was out, the heads were sent away to the machine shop to be resurfaced and pressure tested. When they returned, the engine was reassembled with all new gaskets and seals.

Our immediate thought was that the release bearing may have failed catastrophically, but the noise was not present at all before the rebuild so it was unlikely it had failed immediately. We took the transmission back out to investigate. While we did find the release bearing to be slightly worn, it was certainly not to the point where it would create a noise like that. After some measuring of the clutch assembly and comparing to the original parts, we discovered that the center splines of the new aftermarket clutch were slightly deeper than those on the original clutch. This extra thickness was causing everything to bind up in the bell housing when the transmission was mounted, rubbing together when the engine ran, and causing the noise. We ordered a reproduction release bearing and sent the new clutch off to our machinist to have some material removed from the splines. When it was all reassembled the noise was completely gone.

Our next obstacle came about when it was time to replace the leaking shock absorbers. As you can imagine, they don’t have these parts sitting on the shelf at our local parts store, and Lamborghini has not produced any replacements themselves for a number of years.

This meant it was time to get crafty.

After many tireless hours spent scouring the darkest depths of the Uracco/Jalpa internet forums of decades ago, speaking with the owner of the vehicle, and various industry contacts, we found our answer. After plenty of research and measurements, we sourced a set of Koni Adjustable Race inserts that were a close match to the factory strut cartridges. These would only require minor machine work on the strut housings to fit. When the new strut inserts came in, we compared them to the factory units and our calculations were indeed correct. We left them in the capable hands of our machinist and he brought us back 4 fully functional, adjustable shock absorbers that, most importantly, did not leak.

We set the damping to a tame but firm setting and fitted them back into the car. Everything worked flawlessly, the car now handles better than ever before, and in the event the shock absorbers need to be replaced in the future, parts will be readily available.

These are just a couple examples of what we had to deal with on this car. Each and every hose, nut, bolt, clamp, gasket and seal is a similar story of research and resourcefulness. We had to figure out new sources and alternate options for nearly every part along the way.

When digging into a project car like this, things can go sideways and plans need to be adapted very quickly. This project has tested our team in all aspects, from our technicians to parts and service staff. Everybody stepped up to offer solutions and did their part to execute them effectively. We are incredibly grateful for the opportunity to work on such a rare piece of Lamborghini history and our team looks forward to more projects of this caliber in the future.